Take solace, first-time candidates. If a multi-million dollar presidential campaign of a sitting United States Senator can be this bad, you’ve got nothing to be ashamed of!

But neither should you be guilty of the same cardinal sin as Marco Rubio.

Unbelievably, not only did Marco make this all about Marco, but Marco somehow found a way to use Marco’s own name TWICE in one, short 9-word headline.

And they say TRUMP’S got an ego?!!

I’ve got nothing against Marco, especially since he used to live right here in my adopted home town of Las Vegas. But this kind of self-centered campaign messaging is just inexcusable. Don’t do it! 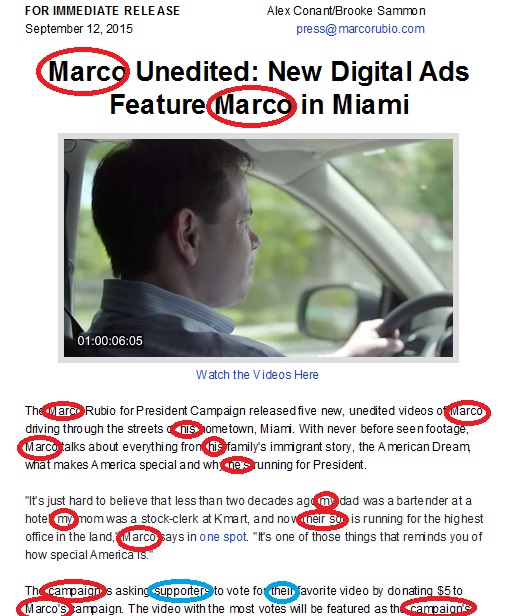 That’s 15 references to Marco and just two to his audience…and those references were only included in a FUNDRAISING PITCH!

I mean, it just doesn’t get much worse than this. However…

My friend Grover Norquist of Americans for Tax Reform is fond of saying, “No one’s life is a complete waste. Some people serve as bad examples.

The same can be said of this press release

Until next time. Onward and rightward…