At Campaign Boot Camp you’ll discover not only what to do, but what NOT to do to best position yourself for victory on Election Day

Campaign Boot Camp is unlike ANY political training program you’ve ever attended.  You’ll learn and discover things that simply aren’t taught in political science classes in colleges and universities (or anywhere else, for that matter), including…

It’s said that those who fail to learn from history are condemned to repeat it.  Yet in election cycle after election cycle, candidates make the same mistakes over and over again that crippled or killed past campaigns.

In this presentation you’ll learn 15 of the most common mistakes made by unsuccessful candidates so you’ll know what NOT to do in your own campaign.

You never get a second chance to make a good first impression.  And you don’t make a good impression when you (a) can’t answer a basic question about your campaign or (b) give a long, rambling answer to a question that doesn’t even answer the question.

In this presentation you’ll learn 20 of the most commonly-asked questions on the campaign trail so you’ll be prepared with a ready response that demonstrates you’re a solid candidate who knows what you’re doing.

If you haven’t written it down, you haven’t thought it all the way through.  Unfortunately, most candidates not only don’t have a written campaign plan, they’ve never even seen one.

In this presentation, you’ll learn the essential elements for writing a solid campaign plan that’ll map out your strategy, messaging and tactics – complete with a sample written campaign plan you can “swipe” to develop your own.

Ignoring weeds in your garden won’t make them go away.  Ditto reporters, columnists and bloggers covering your campaign.  Stories will be written with or without your take on them, so you may as well learn how to make the best of the situation.

In this presentation, you’ll learn some media skills and “tricks” for establishing a solid, professional and fair relationship with media figures that aren’t taught in poli-sci classes.

On paper, planning your messaging strategy is pretty simple: Deliver the right message to the right audience at the right time in the right media.  But as veteran GOP strategist Joe Gaylord likes to say, the planning is easy; the implementation is hard.

In this presentation, you’ll learn some copywriting secrets and “tricks” of the trade that aren’t taught in poli-sci classes which actually persuade people to support your campaign, vote for you, donate to you and/or volunteer to work for you

Most candidates will tell you they HATE fundraising.  And for those without sales experience, asking for $25 is as hard as asking for $2,500.  That’s why so many (losing) candidates spend more time (foolishly) knocking on doors than dialing-for-dollars.

But it doesn’t have to be that way – at least not after learning a few “tricks” on how to put some of the “fun” back in fundraising which aren’t taught in poli-sci classes.

Sitting through a boring political speech is almost as painful for an audience as having a wisdom tooth pulled.  And unfortunately for many candidates, a public speech does more to drive people AWAY from their campaign than towards it.

But it doesn’t have to be that way – at least not after you learn a few simple “tricks” that ANYONE can use but aren’t taught in poli-sci classes.

THE DOCTOR IS IN THE HOUSE

Your instructor will be the Campaign Doctor himself, Chuck Muth, who has over 25 years’ experience as a national campaign training instructor.  But he’s no “gardener with clean hands.”

Chuck continues to run his own non-profit grassroots organization and consults with campaigns every election cycle using the same strategies and techniques he teaches.  Not just “theories” read in a textbook.  Chuck teaches what he’s learned from actually doing it.

And if he can help get a “dead pimp” elected (true story), imagine what he can teach you for YOUR campaign!

WHY YOU SHOULD ATTEND

Again, Campaign Boot Camp will be unlike any campaign training program you’ve ever attended.  You’ll discover how to implement strategies and tactics you’ve never even heard about, let alone read in a poli-sci textbook. 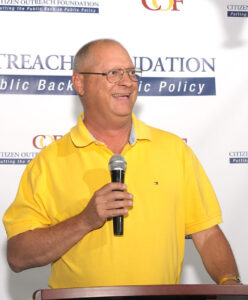 No BS.  No theories.  Just real-world PROVEN strategies you’ll be able to implement immediately to give your campaign an almost unfair advantage over your opposition.

But is Campaign Boot Camp right for you?  Maybe yes, maybe no.  After all, time is money, right?

So to help you decide, here’s what a pair of Boot Camp attendees who have “been there/done that” had to say…

“When I received the email about your campaign training workshop from a friend, I was a bit skeptical after seeing the price. Was I wrong!  That was the best money I’ve spent in quite a while.” – Terry Suominen

“I wanted to see what your introductory political training seminar was about but my wife had extremely high negative interest. So I had to promise we would find a way to sneak out if it was boring.  To say the least, the seminar was anything but boring.  Even though I have considerable political elective experience, I took eight pages of notes.” – Eric Burgess

If you’ve read this far, you’re probably among the top 20% of political activists/candidates who actually take WINNING seriously, as opposed to just sitting on your butt and howling at the moon on Twitter and Facebook.

Taking the next step – getting off the bench and into the game – will move you into the top 5%.   But only if you take ACTION.  Attending Campaign Boot Camp will instantly move you from spectator to player!